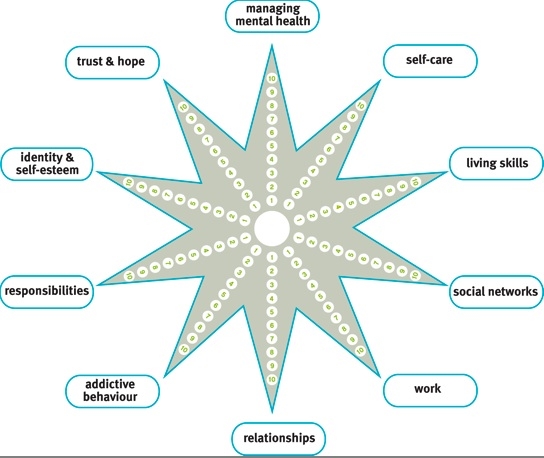 The Mental Health Recovery Star (below) is a widely used tool which aims to provide a map of a multifaceted mental health recovery and a measurement of progress. It was designed by Triangle Consulting Social Enterprise in 2007, a group based in the world of outcome measurement (‘counting what really counts’) and business coaching. The purpose of this critique to explore reasons why we might wish to be cautious about the Recovery Star and its underlying assumptions. It has been prompted by the recent creation of the ‘UnRecovery Star’ by the critical mental health survivor group, Recovery in the Bin. 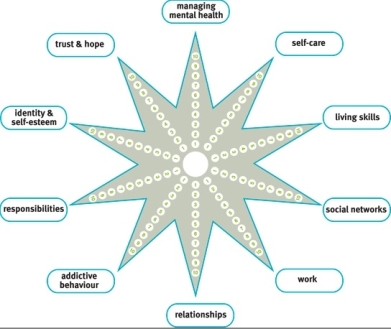 There have been a number of attacks on the Recovery Star. The first and perhaps most obvious is that there is a significant potential for it to manualise improvements in mental health, moving towards the idea that wellbeing is something that can be “delivered” by following a relatively simple procedure and moving away from an understanding that there is an essential relationship of trust and empathy. It has been a long-standing instinct of nurses that such a relationship is vital and service-users consistently report that it is being listened to with empathy which they value more than ‘interventions’. That NHS Managers see the Recovery Star as something which can improve the ‘throughput’ of their service while employing a less expensive workforce is also not in doubt, and the very existence of something like the Recovery Star makes its project – ‘recovery’ – more open to becoming a commodity, along with the people it claims to measure. One should set these points (and the ones which follow) against the unfortunate backdrop that there are plenty of mental health nurses whose level of conversation with service users is significantly less skilled and comprehensive than the Recovery Star and whose relationships are not in general characterised by listening, trust and empathy. Also, one could argue that it is possible to use the Recovery Star, or at least aspects of it, as part of a good relationship rather than as a replacement for it. It may be that many people have felt helped through its use and it is not the intention of this critique to invalidate their experience.

A second attack on the Recovery Star comes from a more philosophical angle: in terms of ethics, it is overwhelmingly consequentialist. While this gives it a great practicality, one cannot help but notice that there are moments in which it seems to treat every action and every other person as transactions to be maximised for personal benefit. It would be difficult to imagine using the Recovery Star to ask service users what it would mean for them to be living a good life, a life that matched or helped them to explore their values, a life of meaning and purpose. Somehow fulfilment becomes functioning. Given that deontological ethics are so important to nurses (a code of conduct, Rogerian principles, a duty of care) there is a (frankly sinister) question about whether values are what nurses aspire to but are somehow too good for our service users. We have a rich and principled inner life… but they should stick to the target-setting of self-management. This criticism is one that could be made of services more widely but is very present in the Recovery Star. 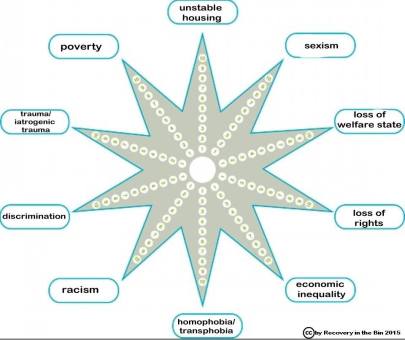 There is a third set of arguments, and they have recently been brought into a sharp focus. Recovery In The Bin is a Facebook-based survivor group, growing in membership and influence. This month they presented at the Making Sense of Mad Studies conference at Durham University. Members have designed another star, the UnRecovery Star (right). UnRecovery is a term which they define in a number of precise ways. It is a project which continues to evolve. Their attack is a political one: far from opening the frames of reference from narrow medical illness to more holistic personal wellbeing, the Recovery Star continues an onslaught of neoliberalism in mental health, in which people are to be made individually responsible for difficulties which would be better thought of as originating in society. Through this lens, the holism of the Recovery Star becomes a complete colonisation of a person with a set of ideas that appear to be liberating but in fact absolve the powerful from the need to acknowledge and address inequalities of all kinds. For example, widening the conversation to include work and financial skills might seem welcome because loss of role, loss of meaningful activity and financial worries are very significant drivers of distress. However, in so doing, we may be failing to notice with the service-user that they live in an unjust society in which finding one’s way and having access to decent housing, meaningful roles, security, having protected rights and simply being allowed to be different seem to be increasingly the domain of the privileged. Being valued in society may be based on assumptions which many nurses may readily agree are insane. Nurses who unquestionably agree with the Recovery Star that mental health is synonymous with self-reliance are perhaps the perfect agents of a State which would like its population to internalise and individualise their distress, to look to themselves for solutions and to suppose that the reason some people have yachts and others have bailiffs is because some people have more personal skills: far from a balanced perspective.

Some final-year mental health nursing students at a large UK university were given the opportunity to compare the two stars as part of their learning about critical mental health. They were asked to consider what a mental health nurse would be doing differently using each star.

Firstly, it was clear that this was new material for them. No one had heard the word ‘iatrogenic’ before, a fact which contains more than a little irony (while acknowledging that it is a rather technical term and that members of the class had considered the possibility that harm may be caused through poor practice). However, it was not just the terminology that was new: it seemed clear that they had been taught and accepted the mainstream messages of distress being mostly biological and occasionally psychological in origin and therefore their focus was a sphere that began and ended with a person’s body/brain and their immediate thoughts, emotions and behaviour. It was difficult for them to formulate ideas for action – a nursing care plan – with the UnRecovery Star. It all looked like problems they could not do anything about.

However, it was more than this. One student made the connection with the idea of internal or external loci of control. This was more familiar territory for the group, and, through that lens, it seemed they were drawn back to prefer the original star. They felt that the external explanations of distress given by the UnRecovery Star would decrease the possibility for recovery because they would discourage the person from taking responsibility for themselves and ‘owning’ their health. There are several things that could be said about this. The first is that it showed that the students understood that responsibility is at the heart of the difference between the Stars. It also showed that they understood that agency is a key part of this debate. After that, it perhaps depends on what view one takes, on one’s politics. Some might say that their instincts perfectly matched their training as normalising agents of neoliberal individualism, being unable to imagine a mental health which was not also making people ultimately responsible for their experiences, and making individuals the only place where change should be brought forth. Under such a view one might notice that as soon as responsibility and change were placed outside of the individual, the student nurses simply had no ideas, no plans, no sense of what could be done about anything and a strong sense that thinking in this way was unhealthy. Accustomed to imagining themselves and their work as apolitical they did not have language to start discussing actions and values such as campaigning and solidarity, empowerment, advocacy, equality and rights. We were not able to move on to any discussion in which we considered what it would be like for a service user to meet either star.

This may all seem rather hard on the student nurses but it seems only right to point out that the exercise revealed that their instinct was to assist people to ‘take responsibility’ for their experiences and they could not easily see how a more social understanding of distress could be turned towards health. Yet the UnRecovery Star was helpful to the students. Through it, they were able to see that the Recovery Star and the individualism it supports is not politically neutral. They might not have had many ideas about how they could work with the UnRecovery Star, but they did view it as missing from standard care and they felt it was an omission that mattered. They agreed with (and were appropriately disturbed by) the thought that a focus on the individual only was in some ways a collusion with direct or systemic abuse and the inequalities of society. They were also able to acknowledge that people in different social situations experienced different kinds and different amounts of choice and that this had a bearing on notions of self-reliance.

As the facilitator, I saw that I share some difficulties with the students. I look into my inner ‘tool box’ and I find that many of the tools are designed to work best in a society which promotes individualism and, yes, recreates health as self-reliance. These tools are not simply wrong but they often further obscure the ways in which I and those around me are formed by society. My experiences of the kinds of possibilities for growth and healing that the solidarity of survivor networks can give, added to the possibilities afforded by the growing number of relationships that I have experienced with people in distress that have placed equality between us as the ‘therapy’, make me feel that it is a difficulty caused by my indoctrination and the stunting of my imagination in a society structured in ways to prevent community and increase alienation. I also feel that I need to constantly remember something I once read in a study relating to the idea of resilience: we are more likely to consider ourselves to be self-reliant when we are surrounded by good social support. This is a conceit I imagine is universal, and one can see how it drives inequality and eases the shift of people towards the right of politics and to prize notions of self-determination as they become more comfortable in life, to discount the significance of the social structures and civil rights that have allowed their individual actions to gain traction.

I think the students shared my feeling that there are no simple answers afforded by keeping both stars in view but that it is essential that we do so and remain feeling uncomfortable. We need to keep thinking about how we may develop skills which would help us use the UnRecovery Star to generate our work.